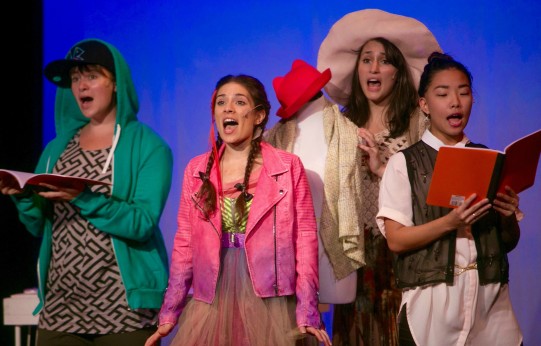 A one-hour pop/rock musical for family audiences, FASHION ACADEMY is a musical tale of finding one's voice and not being afraid to use it.
Mackenzie "Mickey" Williams is the new student at The Fashion Academy of Brooklyn (FAB) Middle School, a training ground for future fashion designers. But Mickey's out-of-the-box thinking and colorful style make her a walking "Fashion Don't." So, in order to fit in, Mickey decides it's time for a major makeover. As the new, trendy "Kenzie," she's able to blend in like a true Fashionista. But will gaining acceptance come at the price of losing herself?


Mackenzie "Mickey" Williams, a quirky tween kid form Philadelphia, dreams of being a famous fashion designer (Dress the World). Thanks to a online announcement from her idol, star fashion blogger Brittany Pelota, Mickey applies to the Fashion Academy of Brooklyn (FAB) Middle School, and miraculously, she is accepted! Despite Mickey's excitement, her mom, Joanna, is hesitant about letting Mickey go (This Life of Mine). But Joanna relents, and Mickey travels to the Big Apple, where she moves in with her Aunt Olive, an uptight workaholic (Moderation).

On her first day at FAB, Mickey wears a loud and crazy outfit of her own design -- sort of "Punky Brewster meets Betsey Johnson." She befriends JC, a fierce and fabulous pop culture expert with a Chihuahua named Madonna. JC and several other students encourage Mickey to "Show Us Who You Are." Mickey's first class, Apparel Arts, is led by Mr. Stitchman, who explains the "Elements of Design." Mr. Stitchman announces the class's first assignment, due tomorrow: take a simple white t-shirt and modify it into a dramatic design for World Hunger Day. That night, as Aunt Olive prepares cabbage salad for dinner, Mickey gets some inspiration for her project.

The next day, Mickey's classmates all present half-hearted projects, but Mickey proudly presents her creation: a red and purple ruffled shirt, dyed with berries and adorned with real cabbage leaves. The odor of rotting cabbage is overwhelming, and Mr. Stitchman exits the room in a wave of nausea. After class, JC -- who had reinvented himself when he first got to FAB -- tells Mickey she needs a makeover, and fast (Brand New You). Mickey rebrands herself as "Kenzie," a Finnish fashion designer's daughter, who's simply hiding out at FAB to avoid the paparazzi. The other kids soon believe that "Kenzie" is a celebrity, and the school's resident design diva, Jade, decides to befriend her wealthy new classmate. As Jade and "Kenzie" browse one of New York's most expensive stores (What You Deserve), Jade tells her new buddy to drop JC as a friend. Mickey, as Kenzie, flatly refuses.

In Aunt Olive's apartment, Mickey struggles with her design for a "Blast From the Past" assignment. Seeking inspiration, she asks Aunt Olive to recall her childhood in the 70s. Aunt Olive softens as she reminisces, and soon the two of them are dancing and singing together (Go Back).
The next day at FAB, Mickey tells Jade and the other kids that "Kenzie" was just an alias, "some stupid idea JC came up with." Stunned and hurt, JC storms out. Jade and the others reject Mickey, too, leaving her to ponder her true identity (The Real Me).

At FAB's end-of-year Fashion Showdown, Jade and Mickey square off for first place. Mickey apologizes to JC, who agrees to model for her runway show. Jade's bedazzled designs are impressive, but Mickey steps forward and proudly asserts her own identity. With the help of her three models -- Mom, Aunt Olive, and JC -- Mickey presents designs "inspired by the people I love."

Despite Mickey's bold designed, the top prize goes to Jade. Still, Mickey's idol, star fashion blogger Brittany Pelota, saw the competition and loves Mickey's designed. Brittany invites Mickey to be on her show -- along with JC and Madonna the Chihuahua. When Brittany asks Mickey to share advice with other designers, Mickey encourages them to be brave enough to be themselves (Open The Door).