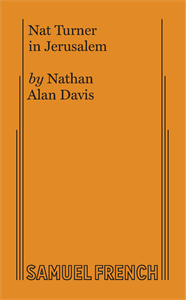 
In August 1831, Nat Turner led a slave uprising that shook off the conscience of the nation. Turner's startling account of his prophecy and the insurrection was recorded and published by attorney Thomas R. Gray.

Nathan Alan Davis writes a timely new play that imagines Turner's final night in a jail cell in Jerusalem, Virginia, as he is revisited by Gray and they reckon with what has passed, and what the dawn will bring. Woven with vivid imagery and indelible lyricism, Nat Turner in Jerusalem examines the power of an individual's resolute convictions and their seismic reverberations through time.
REVIEWS:

"[T]he most interesting part of the creative exercise is not the activity inside Turner's cell, but the breadth of its implications about our relationship with history as a whole -- whether 200 years past or flooding your Twitter feeds as we speak."

"But while offering a corrective to earlier interpretations of Turner's narrative, Davis doesn't attempt to saddle it with an equally overbearing one; he resists any singular reading, let alone an overtly political one. He prefers to let the tale remain as mysterious and open-ended as possible, and thus, in its way, more terrifying."

Premiere Production: Nat Turner in Jerusalem premiered at the New York Theatre Workshop in New York City in September 2016 under the direction of Megan Sandberg-Zakian.