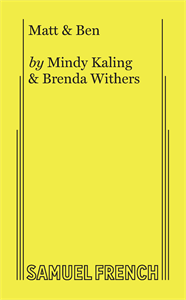 Matt & Ben depicts its Hollywood golden boys -- before J-Lo, before Geyneth, before Project Greenlight, before Oscar [...] before anyone actually gave a damn. When the screenplay for Good Will Hunting drops mysteriously from the heavens, the boys realize they're being tested by a Higher Power.
REVIEWS:

"BEST COMEDY OF THE YEAR!"

"The hottest ticket in town! A twisted tale about how Matt Damon and Ben Affleck wrote the Oscar-winning movie Good Will Hunting!"

"THE HOTTEST PLAY IN NEW YORK!"