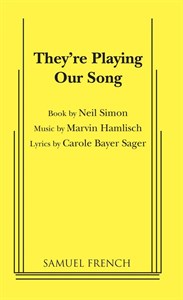 A funny, romantic show about an established composer and his relationship with a aspiring young female lyricist.

America's premier funny man and the Tony Award-winning composer of A Chorus Line collaborated on this hit musical, a funny, romantic show about an established composer and his relationship with an aspiring young female lyricist, not unlike Carole Bayer Sager. Professionally, their relationship works beautifully, but ultimately leads to conflict on the home front. Of course, there's a happy ending.
REVIEWS:

"Neil Simon was at the top of his playwright-crafting game when he wrote the book for They're Playing Our Song."

"It is fun and it is funny, full of blithe good humor, hilarious jokes and witty, pointed characterizations... The concept of the musical is absolutely beguiling... Simon has gotten himself another odd couple even odder than his first and is at his most sprightly and acidly comic."

Premiere Production: They're Playing Our Song received its world premiere at the Center Theatre Group's Ahmanson Theatre in Los Angeles. The play was subsequently first presented on Broadway by Emanuel Azenberg at the Imperial Theatre in New York City on February 2, 1979. It was directed by Robert Moore and choreographed by Patricia Birch.