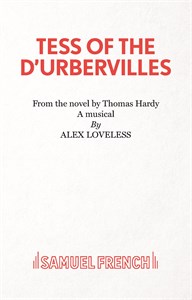 Tess of the D'Urbervilles


Tess of the D'Urbervilles is the story of a farm girl and what happens after she discovers the truth about her family's illustrious heritage. Tess is seduced by the wealthy Alec D'Urberville and bears him a son who dies in infancy. She later marries Angel Clare, a gentleman farmer, but he learns of her past with Alec and abandons her. In order to support her family, Tess agrees to become Alec's mistress. When Angel returns, Tess murder Alec in a fit of passion. The police track Tess and Angel to Stonehenge. As Tess is led to the gallows, she imagines what life could have been had she never had discovered her ancestry...

Tess of the D'Urbervilles is scored in a 'through-composed' style. The score incorporates a range of musical styles, from folk and church music to operetta. Containing timeless themes, including the sacrificial nature of true faith and virtue versus moral absolution, religious dogma and fanaticism; the place of women in society; and an examination of the true nature of nobility; Tess has lost none of its power or relevance since its first publication.
REVIEWS:

"The Loveless brothers... have brought great sincerity to their storytelling...surging power ballads...very well delivered...a compelling centre to the show..."

"...superbly conceived and realised... there is so much to admire in this production... the fusion of the Victorian Novel and Musical Theatre is remarkable."

"Boasting a charming score... a welcome addition to the roster of new British book musicals."

"...a dramatic triumph... an absolute joy to watch... If you are looking for depth, fantastic acting, great movement, sublime singing and music then this is the show for you."

"...a wonderful evening of storytelling. This beautiful new musical... has a perfect blend of a new score, great book, talented cast and winning direction."

"...an exciting and accessible production... The musical score with its notable numbers will leave you humming... a glorious afternoon."

"...wonderfully fresh and dynamic... a masterpiece, not only of musical intensity but also of outstanding stagecraft... a beautiful new musical."

"...sheer enchantment from start to finish... songs that could easily become standards..."

"...the best new musical to hit to Off-West End stage in years... Awarding Tess of the D'Urbervilles five stars seems stingy... I haven't been this bewitched by any musical since I first watched Boublil and Schönberg's Les Misérables. This is a musical that tugs the heartstrings and won't let go. It's divine work."

"..this fine musical...this is a first rate affair worth seeking out without delay."

"...atmospheric and melodic... a bold and well told story."

"...thoroughly engaging... this is something incredibly special."

Premiere Production: First produced in 2014 at the New Wimbledon Studio Theatre by Stepping Out Theatre in Association with Partisan and Fallen Angel Theatre.