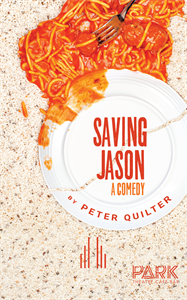 "Your parents are scared you're going to end up as screwed up as they are. It's a factory conveyer belt and nobody can get on it. You think you're the centre of the world, Jason, entitled to everything. But try and occasionally listen to your parents. They genuinely care about you. Which is amazing, given what a complete asshole you are."

The year is 1996. Trevor and Linda have been struggling for a while to deal with the behaviour of their rebellious teenage son Jason. In a moment of madness, they hatch a plan to create his own funeral in their living room. The idea being that when Jason attends, he will be confronted by his own mortality, and the shock will enable him to start re-thinking his life. A life currently filled with midnight raves, suspicious friends, and Ecstasy tablets.

Jason's aunt and uncle, Angela and Derek, join in the charade but arrive loaded with their own baggage and very quickly the whole scenario descends into chaos. Voices are raised, emotions are laid bare and secrets are revealed. Also, quite a bit of food is thrown, too much alcohol is drunk, too many pills are popped and the whole event whips up into a whirlwind of delinquency. It is left to the elderly neighbour Mary, armed with muffins and experience, to try and save the day.

Created by the two-time Olivier Award-nominated writer Peter Quilter, of the West End and Broadway hits Glorious! and End of the Rainbow. This play is full of eccentric characters and bursting with great one-liners. A sharp and addictive comedy that takes a wildly funny look at life in your typical dysfunctional family.
REVIEWS:

"Saving Jason is a comedy that packs a punch... It keeps the audience in stitches of laughter throughout."

"Quilter's unorthodox black comedy really does hit all the right buttons... An admirable new play with a lot of issues to get your teeth into... Darkly funny, thought provoking and shockingly current."

"A clever, intimate and heartfelt play."

"Just the right amount of humour alongside tension that explodes in all the right moments."

"The play manages to tackle serious issues through the absurd and ridiculous due to quick wit and strong performances... It is a fantastic interpretation of an age old situation."

"An incredible new play... To be able to convey sucj a tension filled topic with humour is an extraordinary feat... Outrageously hilarious with laugh out loud moments... Not to be missed."