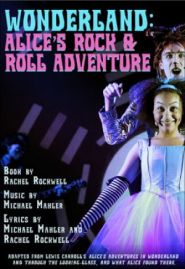 How can you march to the beat of your own drummer when you're still writing the song? Everyone's search for one's authentic self is at the heart of Wonderland: Alice's Rock & Roll Adventure.


How can you march to the beat of your own drummer when you're still writing the song? Everyone's search for one's authentic self is at the heart of Wonderland: Alice's Rock & Roll Adventure. Carroll's beloved, poetic tale of self-actualization is brought to life by a cast of actors/musicians who create an eclectic, live rock soundtrack as seven-and-a-half year old Alice searches for her own inner musical voice.

Along the way, Alice faces challenges and fears, but she meets the ultimate test in the form of the Jabberwocky, an insidious monster made up of the dark thoughts and self-doubt that lurks inside us all. In learning to believe in the impossible, Alice learns to believe in herself. Throughout her journey, the actors surround Alice in a live musical tapestry ranging from classic rock to punk to ska and even a little bit of Bollywood.

Rock concert meets live theatre as Alice reflects the vulnerabilities of all kids and then confidently finds her own inner voice.
LISTEN TO AUDIO SAMPLES HERE!
REVIEWS:

"A refreshing, rockin' take on the adventures of Ms. Alice, here rendered not as a dainty lady, but as an indie-like musician, as cool as the Chershire Cat."

"A rock 'n' roll musical full of tunes that soar."

"Alice's trippy adventures [are] as appealing to children as they are to parents."

"An ideal mix and heart that should have appeal for audiences of all ages."

"Rare is the staging of an 'Alice' that so well links the heroine of the story with all her potential peers in the audience."

"Sticky, melodic, smart songs, and the opening number... is a smash."

"There simply isn't a dull moment from start to finish."

"This 'Wonderland' rocks-classic rock, a bit of metal, a bit of punk, even a ballad or two, all with clever, up-to-date lyrics."

Around The Town Chicago