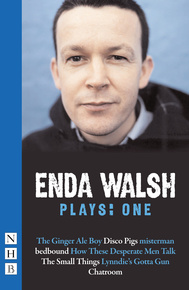 The first eight astonishing plays by Enda Walsh, "one of the most dazzling wordsmiths of contemporary theatre" (The Guardian).

The first eight astonishing plays by Enda Walsh, "one of the most dazzling wordsmiths of contemporary theatre" (The Guardian).

Bursting onto the theatre scene in 1996 with Disco Pigs, Enda Walsh has delivered a sustained fusillade of strikingly original plays ever since. This volume, with a Foreword by the author, contains:

Disco Pigs (1996), his breakthrough play, winner of the 1997 George Devine and Stewart Parker Awards, a play that "does for Irish kids what Irvine Welsh's Trainspotting did for young Scots" (Daily Telegraph).
Misterman (1999, revised in 2012), in which we meet Thomas Magill on his obsessive mission to bring God to the townsfolk of Inishfree.
bedbound (2000), his Fringe First Award-winning play, in which a father and daughter are trapped in their own compulsive and claustrophobic story.
The Small Things (2005), a "harrowingly precise and poetic" (The Guardian) exploration of language and our need for words to survive.
Chatroom (2005), a chilling tale of teenage manipulation that was written for the National Theatre's 2005 Connections season.
Also included are two previously unpublished short plays, How These Desperate Men Talk (2004) and Lynndie's Gotta Gun (2005), written during Walsh's time working with European theatremakers.