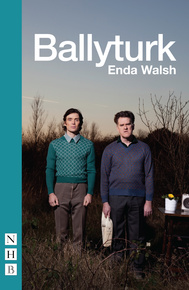 The lives of two men unravel over the course of ninety minutes. Where are they? Who are they? What room is this, and what might be beyond the walls?

"Wild, fast, often hilarious and sometimes melancholy... Enda Walsh retains his ability to unsettle, to place side by side daft slapstick, playful theatricality and sublime poetry."

"A richly theatrical experience… combines manic physical comedy with a meditation on the brevity of our earthly existence… imagine Under Milk Wood interpreted by Buster Keaton and you get the picture."

"Ferocious physical slapstick comedy is interspersed with heartbreakingly tender and delicately poetic explorations of the soul... it throbs with searing poignancy at times, is riotously funny at others… a remarkable achievement."

"Delirious and captivating… this is thrilling theatre, visceral and cerebral, hilarious and sad."