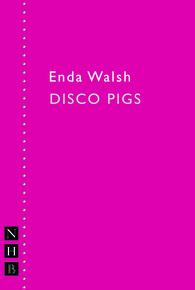 The award-winning play about two warped teenagers that confirmed Enda Walsh's place in the forefront of young Irish dramatists.

The award-winning play about two warped teenagers that confirmed Enda Walsh's place in the forefront of young Irish dramatists and was filmed in 2001 with Cillian Murphy and Elaine Cassidy.

Pig and Runt are two 17-year-olds who share everything: birthday, language, worldview - and that moment when pop songs and life-changing orgasms flash by and last forever.

Enda Walsh's play Disco Pigs was first performed by Corcadorca Theatre Company at the Triskel Arts Centre, Cork, in September 1996, and subsequently at the 1996 Dublin Theatre Festival. It received its UK premiere at the Traverse Theatre, Edinburgh, in August 1997, before transferring to the Bush Theatre, London, in September 1997, and then on international tour.

It won the Stewart Parker Prize for the best Irish debut play and the George Devine Award in 1997.
REVIEWS:

"20 years on, Enda Walsh's play about two disaffected teenagers has lost none of its kinetic energy, nor the power to simultaneously shock and move… the dialogue has a hypnotic and poetic quality."

"Poignantly funny, full of sound and movement, this electric two-hander is phenomenal."

"Does for Cork kids what Irvine Welsh's Trainspotting did for young Scots."