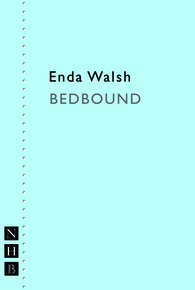 A ferocious two-hander about a father-daughter relationship gone horribly and terrifyingly wrong.

A ferocious two-hander about a father-daughter relationship gone horribly and terrifyingly wrong.

Father and daughter share a small bed. He talks frantically about his extraordinary past in furniture sales; she talks no less compulsively about anything at all, to fill the terrifying silence in her head.

Enda Walsh's play bedbound was first performed at The New Theatre, Dublin, as part of the Dublin Theatre Festival 2000. It received its UK premiere at the Traverse Theatre, Edinburgh, during the 2001 Edinburgh Festival Fringe, and was revived at the Royal Court Theatre Upstairs, London, in January 2002.
bedbound is also available in the volume bedbound and misterman: two plays.
REVIEWS:

"A play unlike any other I have seen. Enda Walsh's vision of wounded humanity... has a precision that is entirely his own... an uncomfortable, unforgettable tour-de-force."

"Holds the attention magnetically... Not for the squeamish or the faint at heart."