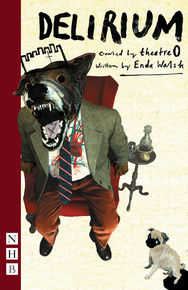 Hilarious, brutal and tragic, Delirium is a radical re-interpretation of The Brothers Karamazov, Dostoevsky's classic and compelling tale of family rivalries.


Hilarious, brutal and tragic, Delirium is a radical re-interpretation of The Brothers Karamazov, Dostoevsky's classic and compelling tale of family rivalries. The play is the result of a collaboration between acclaimed company theatre O and award-winning playwright Enda Walsh.
The Karamazovs are a train wreck waiting to happen. A hated father and his sons battle it out over women, money and God. They don't so much live as burn up. Behind them lurks a servant, taking note of it all; and to the side, two beautiful women, clinging onto impossible loves.
Delirium was first performed in April 2008 on tour prior to playing at the Abbey Theatre, Dublin, and the Barbican, London.
REVIEWS:

"A heady brew of lush phrasemaking, puppetry, rock music and whirling physicality that distils Dostoevsky's battle of good and evil into a couple of hours of demented theatrics. Not everyone's cup of tea, to be sure, but it catches how life can be petty, grubby and profound - often all the same time."

"Unmissable... as brave, as searingly true and as epic as the original."