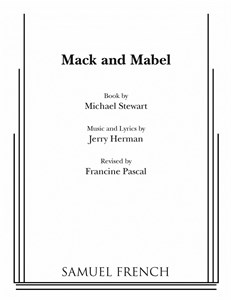 A True Love Story of Mack, Mabel, and the Movies.

This is a saga of the silent film era "when movies were movies", the story of legendary director Mack Sennett and his greatest star, the adorable Mabel Normand.
It is told in flashback by Mack himself as the protagonist narrator, a broken man, made obsolete by talkies, bankrupt and forced to sell his studio, he reminisces about the past, recalling his triumphs and his turbulent love affair with Mabel whom he had discovered and made a star. He loves her, but cannot tell her, sending her into the arms of a rival who feeds her drugs.
Now available in a revised version that contains changes made for the London revival that won the Evening Standard's coveted Drama Award for Best Musical.
REVIEWS:

"Mr. Herman has the common touch, a gift for melodies familiar and memorable... A musical in the old and true tradition."

Premiere Production: Mack and Mabel was first presented on Broadway by David Merrick at the Majestic Theatre in New York City on October 6, 1974. It was directed by Gower Champion.