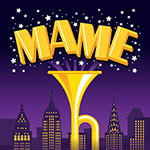 Who is MAME? Some of Mame’s wild, adventurous spirit is inside everyone who lives for the moment and believes that “life is a banquet!” It’s the height of the 1920’s and Auntie Mame becomes the guardian for her ten-year-old nephew, Patrick.
Special songs include Mame, It’s Today, Open a New Window, If He Walked into My Life, We Need a Little Christmas, Bosom Buddies and That’s How Young I Feel.
Her life is turned up-side-down, many of her priorities change, but she still lives life to the fullest.

Mame is hip and happening. She is well-to-do, lives in New York at the peak of the 1920's, and is surprised by a “wonderful present”: an orphan nephew named Patrick. Now, ten-year-old Patrick needs his aunt, and this is something new for Mame-to be needed. It changes her life. It brings her into sharp conflict with her best friend, Vera Charles, a multi-martini grande dame of the legitimate theatre-for Vera can’t stand children. The man Mame is about to marry is perfectly willing to take on the boy as a bonus, but Mame doesn’t think she’ll have time for marriage- "I’ll be too busy being a mother!" The boy’s nanny, Agnes Gooch, doesn’t approve of those irrepressible things which go on in Mame’s Beekman Place apartment, and yet she inevitably falls under her spell.

Eye to eye, toe to toe, Mame battles Babcock, the Babbitt-ish banker who wants to make young Patrick the prisoner of the Establishment and put the chains of conformity around him. With the balloon burst of the Depression, it looks as if Babcock is going to have his way. Mame loses all her money, and she loses jobs as quickly as she finds them. (Mame’s gift is giving, not working for hire!) In a brief adventure as a manicurist, she meets Beau-a wealthy scion of the South. He takes Mame to his plantation for the begrudging approval of his family. They are astounded at her exploits on horseback (so is she)! Of course, Beau proposes-in the bouncing title song which sings the praises of Mame!
There’s only one problem as the curtain falls on the first act-young Patrick, who has given her such joy and provided a purpose in her life, smiles bravely. But he’s afraid he has lost his Best Girl.

Act Two rushes headlong into the Thirties. Vera stands by her Bosom Buddy when Mame returns to Beekman Place after Beau’s sudden death. Patrick, now in college, and Mame’s former suitor, Lindsay Woolsey, prompt Mame into writing her memoirs. Gooch has been primed in secretarial school to type up Mame’s pearls of wisdom-but an experiment in a liberated life has a transforming influence on Patrick’s nanny.

And the maturing Patrick seems to be slipping away from Mame’s ideal of freedom. When he declares his engagement to a fatuous blonde “with the IQ of a dead flashlight battery,” Mame is in despair. What did she do wrong? What would she do differently, “If he walked into my life today?”

But the lady’s resources are endless. Just as young Patrick rescued her from the shallow trap of the Twenties, she helps the boy to save himself from a life of Darien drabness and snobbery.

Mame is Eve, St. Joan, Lady Godiva, Susan B. Anthony, Clara Bow and Florence Nightingale. She dances, too, and defies all generation gaps! We have seen hundreds of Auntie Mames and Mames: in each one there seemed to be a flash of something a bit different, a new discovery in the way this remarkable lady thinks, feels, moves.