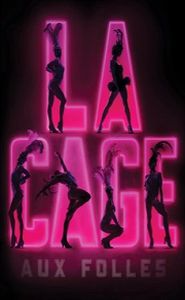 PLEASE NOTE: This title is restricted and may require clearance before a license is granted.

Much revived, most recently in a 2010 production transferred to Broadway from London's Menier Chocolate Factory, La Cage Aux Folles remains one of the all time biggest hits, adding new dimension to the boulevard comedy.

After twenty years of un-wedded bliss Georges and Albin, two men partnered for better-or-worse get a bit of both when Georges' son (fathered during a one-night fling) announces his impending marriage to the daughter of a bigoted, right-wing politician. Further complicating the situation is the "family business": Albin and Georges run a drag nightclub in St. Tropez, where Albin is the "star" performer "Zaza". Georges reluctantly agrees to masquerade as "normal" when he meets the family of the bride-to-be. But Albin has other plans, with hilarious results.
REVIEWS:

Premiere Production: LA CAGE AUX FOLLES opened at The Palace Theatre in New York City on August 21, 1983. It was directed by Arthur Laurents.