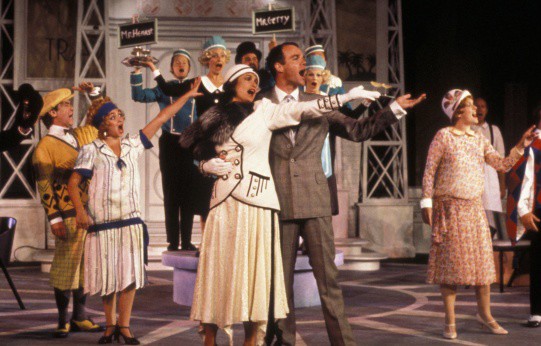 LADY, BE GOOD was the very first Broadway collaboration of the Gershwin brothers. The show tells the story of a brother and sister who are out of money but will do anything to help one another.

LADY, BE GOOD was the very first Broadway collaboration of the Gershwin brothers. The show tells the story of a brother and sister who are out of money but will do anything to help one another.

Act I
The brother/sister dance team of Dick and Susie Trevor are so broke that they can’t pay the rent and have been evicted from their childhood home. They crash the garden party of wealthy Jo Vanderwater for a free meal. Dick loves Shirley Vernon but is ashamed to pursue her because of his financial situation. Jo is interested in Dick, and it turns out that she was behind the eviction, as a ploy to get his attention. Meanwhile Susie tries to talk herself into liking the affluent Jeff White, but she finds herself falling for Jack, a charming “hobo”; Jack leaves town.

Jack’s uncle dies, and he is apparently a millionaire. Lawyer Watty Watkins is looking for Jack Robinson on behalf of his client, the flamboyant Manuel Estrada, who says that his sister married Mr. Robinson in Mexico. Watty offers Susie $50,000 to help him, by pretending to be Robinson’s widow, to get the money from the Robinson estate. Meanwhile Dick proposes to Jo, since he thinks he can never afford to court his true love Shirley.

Act 2
Dick finally tells Shirley that he loves her, while Watty and Susie (in disguise) execute their plan. Jack finally hears that he has inherited the fortune and returns, still dressed as a hobo. He is amazed to find Susie claiming the money as his “widow”. Susie does not know that her Jack is the now-wealthy Mr. Robinson, nor that she is being used by Estrada, whose sister never really married Jack.

In the end, Dick and Shirley are reunited, Jack saves Susie from disgrace by declaring his love, and Jo and Watty pair off happily. All wed happily ever after.

Premiere Production: LADY, BE GOOD opened on Broadway at the Liberty Theatre, December 1, 1924 and played for 330 performances starring Fred Astaire and his sister, Adele Astaire.