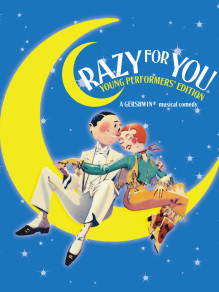 Crazy For You - Young Performers' Edition

CRAZY FOR YOU is the story of Bobby Child, a well-to-do 1930’s playboy whose dream in life is to dance. And despite the serious efforts of his mother and soon-to-be ex-fiancée, Bobby achieves his dream! It’s a high energy comedy which includes mistaken identity, plot twists, fabulous dance numbers and classic Gershwin music.
The Young Performers’ Edition is a one-hour adaptation specially tailored for elementary school and middle school aged children. The materials have been prepared to help your school or organization mount the best possible production and to give your children an exciting and rewarding experience.

As the curtain is about to fall for the season at the Zangler Theater in New York City, Bobby Child, an aspiring performer and son of a wealthy banking family, meets Tess, the dance director of the Zangler Follies, backstage right before giving an impromptu audition for the famous Bela Zangler (K-ra-zy For You).
Bobby’s audition doesn’t go quite as planned. After stepping on Mr. Zangler’s foot, Bobby leaves the theater feeling rejected and is met with his fiancée, Irene Roth, who pressures him to marry her. Meanwhile his mother, Lottie Child, has also arrived and demands that Bobby leave for Nevada to foreclose a dilapidated theater (I Can’t Be Bothered Now). Torn between the pressures of his fiancée and his mother, Bobby decides to make his way to Deadrock, Nevada, a city with little life, but a bevy of interesting characters (Bidin’ My Time).
While in Deadrock, Bobby meets Polly Baker, a postmistress, for whom he instantly falls head over heels. To win her affections, Bobby must compete with the equally-smitten Lank Hawkins, the owner of the town hotel, as well as figure out a plan to save the theater. In a conversation with Polly, Bobby suggests they put on a show to raise the money to pay off the mortgage on the theater, and in the process, he accidentally reveals that he is the banker who was sent to shut the theater down. Thinking it was all a trick, Polly storms off upset, and Bobby decides he must pretend to be Mr. Zangler himself, inviting the Follies Girls to Deadrock to help him save the theater (Girls Enter Nevada).
The town is thrown into a commotion as Bobby, disguised as Bela Zangler, and the Follies Girls arrive. After meeting who she believes is Mr. Zangler, Polly realizes she might be ready to fall in love with the right person (Someone To Watch Over Me). Rehearsals get underway (Slap That Bass), and Polly falls for the disguised Bobby because of his ability to inspire the town (Embraceable You). Putting on a show has completely transformed Deadrock from a lifeless ghost town to a city full of possibilities. Unfortunately, just as the show is about to open (Tonight’s The Night), the town is met with their only audience members, an English couple named Eugene and Patricia Fodor, who are in town not to see the show, but to write a book about the American West. Though disappointed, Polly, Tess and Bobby lift up the company’s spirits through song and dance (I Got Rhythm).
Just as things can’t get any zanier, they do! Bobby confesses his love for Polly, but Polly admits she is actually in love with Mr. Zangler. Unexpectedly, Irene arrives in town looking for Bobby, and stays at Lank’s hotel. Meanwhile the real Mr. Zangler arrives in town, looking for Tess, with whom he is in love. True identities are revealed, and Polly is more embarrassed than ever. Bobby finally tells Irene that it’s over between them because he’s in love with Polly, and in a moment of impulse and desperation, Irene proposes to a surprised Lank.
Meanwhile, a company meeting has convened, and Bobby and Polly quarrel about saving the theater. The Fodors see that the company is down in the dumps and encourages them to stay positive (Stiff Upper Lip). The company is encouraged and uplifted by the Fodors’ advice, but in the end, the company decides to give up on the show. Before Bobby returns to New York, he shares his affections for Polly (They Can’t Take That Away From Me). Polly realizes it was Bobby she was in love with all along and reciprocates, but it’s too late — Bobby has already left.
Back in New York, Bobby’s mother gives him the deed to the Zangler Theater — Mr. Zangler has taken on the theater in Deadrock and has neglected to make payments on his own theater in New York. Bobby imagines what he could do with his own theater, but can’t let go of Polly (Nice Work If You Can Get It). Bobby returns to Deadrock to find her. Polly has become the star of Mr. Zangler’s show, but decides she must go to New York to be with Bobby. Just in time, Bobby arrives in Deadrock and is surprised by Polly, who hasn’t quite left yet. The town celebrates as the two lovebirds finally share a dance and get together at last (Bows/I Got Rhythm).