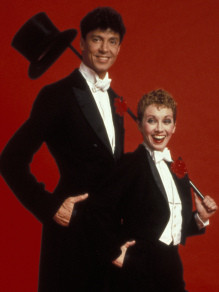 My One and Only

MY ONE AND ONLY takes the heart-stopping songs ’S Wonderful, Funny Face and of course My One and Only from George and Ira Gershwin’s FUNNY FACE, along with great numbers from several other Gershwin shows, and joins them with a new book which is frothy and fun.

Other fabulous tunes include I Can’t Be Bothered Now, He Loves and She Loves, Strike Up the Band, Nice Work If You Can Get It and Kickin’ the Clouds Away.
This musical gets buoyancy from its spoofy tone. The barn-storming pilot and pretty Channel swimmer are like Fred and Adele Astaire from the 1927 FUNNY FACE, surrounded by a combination of hip dancers from the 1940’s and the chic sensibility of the 1980’s. The show has more dancing than most, and the dancing is a great deal of fun.


MY ONE AND ONLY, the Tony Award winning musical which opened on Broadway on May Day, 1983, concerns an aviator, a Channel swimmer and the America of 1927 which knew exactly what it wanted -I Can’t Be Bothered Now. It features a sensational George and Ira Gershwin score.
Captain Billy Buck Chandler is determined to be the first man in history to fly solo across the Atlantic Ocean. His mission is somewhat sidetracked at a railroad station when he first lays eyes on Edith Herbert, ex-Channel swimmer and current star attraction of Prince Nicolai Erraclyovitch Tchatchavadze’s International Aquacade -Blah, Blah, Blah. To the chagrin of his female mechanic Mickey, Billy dreams of her -Soon while Edith dreams of romance -Boy Wanted.
Determined to meet and win her, Billy takes a crash course in sophistication at Mr. Magix’ Tonsorial and Sartorial Emporial, where the urbane, all-knowing Mr. M tells Billy what it’s all about -Sweet n’Low Down.
Arranging to run into Edith “accidentally” at the movies where she often goes to fantasize – the Russian Prince Nikki keeps a tight rein on her, having in his possession certain compromising photographs – Billy and Edith fall in love -He Loves and She Loves.
Seeing Billy as her only hope of escaping Prince Nikki, Edith persuades Billy to fly her to Cuba, but Nikki sabotages the plane and the two lovebirds fall to earth on a seemingly deserted island which they quickly turn into Paradise -It’s Wonderful.
But when Nikki finds them and forces Edith to go back to the Aquacade by threatening to reveal her past, Billy, left alone, bitterly returns to the only dream left him – his flight to Paris and the fame he will achieve -Strike Up the Band.
Life at the Aquacade goes on -In the Swim, but Edith is despondent -Nice Work If You Can Get It, and decides to run away.
Billy, however, is unable to forget Edith. He returns to Mr. Magix for fresh advice. What should he do now? Mr. M counsels him that only love matters -My One and Only.
After a brief interlude that finds Prince Nikki and Billy’s female mechanic Mickey falling head over heels for one another -Funny Face, Billy takes off in his plane, the Lone Star, in search of Edith.
He finds her in Morocco – it was the location of the movie they fell in love at – and persuades her to return to America with him and get married, which they do -Kickin’ the Clouds Away. After the ceremony, happiness theirs, Edith pauses to wonder at it all -How Long Has This Been Going On. To the surprise of practically no one, they will live happily ever after.


Premiere Production: My One and Only played for 767 performances on Broadway at the St. James Theatre starring Tommy Tune and Twiggy. Tommy Tune also co-choreographed with Thommie Walsh.