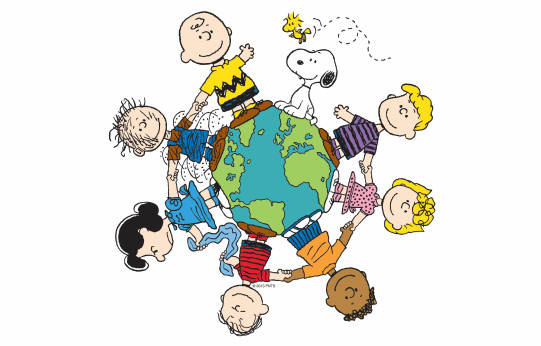 Tuneful! Charming! Hilarious! Yes, SNOOPY!!! -- the musical sequel to YOU'RE A GOOD MAN, CHARLIE BROWN -- deserves each of its three exclamation points. Based on the beloved Peanuts comic strip by Charles Schulz, the show sparkles with wit and warmth as it depicts life as seen through the eyes of Schulz's unforgettable characters. Musical numbers include "Just One Person," "Poor Sweet Baby," "Don't Be Anything Less (Than Everything You Can Be)," "Edgar Allen Poe" and "Daisy Hill."
The London version of SNOOPY!!! includes all the songs from the Original Version, plus four more: "Hurry Up, Face," "Mother's Day," "Dime A Dozen," and "When Do The Good Things Start?"


Charlie Brown and the rest of the Peanuts gang celebrate "The World According to Snoopy." Snoopy, decked out as "Joe Cool," enters and casually reclines on his doghouse. After a series of brief vignettes, Snoopy laments the monotony and repetition of his daily life ("Snoopy's Song"). But he changes his mind after Lucy suggests that Charlie Brown trade him in for a couple of goldfish.

Woodstock, Snoopy's silent but expressive bird pal, falls in love with a work ("Woodstock's Them". Snoopy remarks, "That's like me falling in love with a can of dog food." But it doesn't last long: Woodstock's wormfriend runs off with the early bird.
Peppermint Patty, insecure about the size of her nose, wishes the rest of her face would catch up ("Hurry Up, Face").
In school, Sally excels at Show-and-Lie, Peppermint Patty gets carried away in answering true-or-false question, Linus waxes poetic on his summer vacation, and Lucy applies her math skills to Louis the Fourteenth. But mostly, the entire class agonizes over "Edgar Allen Poe."

Snoopy, mistaking a stranger for his mother, sings a tribute to his estranged mom ("Mother's Day").
Lucy asks Peppermint Patty and Sally, "Wouldn't it be wonderful to have your whole life to live over is you knew what you know now?" and the three girls celebrate the breadth of their knowledge ("I Know Now").
On Halloween, Linus sits in the pumpkin patch, awaiting the arrival of the Great Pumpkin ("The Vigil"). Later, the whole gang relaxes on the grass, discovering imaginative patterns in the "Clouds."
Snoopy enters as the Easter Beagle, distributing colored eggs to everyone... except Charlie Brown. Charlie Brown, musing on the new independence of his pet, wonders "Where Did That Little Dog Go?" Lucy, Patty and Sally declare that dogs like Snoopy are a "Dime a Dozen." Snoopy nostalgically recalls his days at the puppy farm ("Daisy Hill") and settles into his favorite position: reclining on his doghouse with his head in the water dish.
Lucy, grumbling about this boring town, wonders "When Do The Good Things Start?" Her question develops into a spirited musical number, ending with the whole gang signing, "How about if some good things start right now!"
Act Two opens as Snoopy, "the world-famous writer," feverishly pecks away at his typewriter. His short story submission is rejected by Playbeagle magazine, so he decides the write The Great American Novel ("The Great Writer").
At Lucy's five-cent psychiatric booth, Charlie Brown wishes someone would they like him, but Lucy simply can't do it.
Peppermint Patty asks Charlie Brown to explain love to her, and he describes the kind of girl he'd like to marry: someone who'd call him "Poor Sweet Baby." Patty sings a lovely, affectionate song to Charlie Brown, and then says, "Forget it. It'll never happen."

The entire gang goes to the movies, where Snoopy presents his "Paw-pet Theatre" version of Jaws, entitled Teeth. Autumn leaves begin to fall. Inspired by the resilient cycle of nature, Sally leads the gang in a rousing song called "Don't Be Anything Less Than Everything You Can Be." Woodstock delivers a letter naming Snoopy "Head Beagle." Snoopy proudly accepts the honor ("The Big Bow-Wow").
Everyone begins preparing for Christmas: Woodstock gives Snoopy a Christmas card, Lucy writes to Santa, requesting cash, and Charlie Brown admires the stars at Christmas time. He believes there's one star out there that is his star, prompting Linus to ask, "Wouldn't it be wonderful if everybody believed in everybody?" Lucy scoffs at believing in someone like Charlie Brown, but Snoopy admits, "You gotta start someplace." He begins to sing, and one by one, the kids join in. Soon the entire gang is holding hands and singing together ("Just One Person").
Charlie Brown pets Snoopy and puts him to bed, saying, "He isn't much of a dog. But after all, who is?" Snoopy sighs and settles into sleep as the lights fade.

SNOOPY!!! was created as a sequel to YOU'RE A GOOD MAN, CHARLIE BROWN and opened in 1975 at the Little Fox Theatre in San Francisco. The London Version opened at the West End Duchess Theatre on September 20, 1983 and played for 479 performances starring Teddy Kempner as Snoopy.