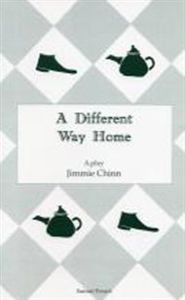 A deeply moving, astutely observed play which consists of two monologues from a middle-aged estranged brother and sister in a closely-knit, North of England town.

In this deeply moving and astutely observed play, we hear two monologues from two members of a family in a small, closely-knit, North of England town. In Act I, Leslie who has lived with his mother all of his life, narrates the events leading up to her death, unwittingly revealing the extent of his loss and the bitterness towards his sister, Maureen, who lives nearby but is not in touch.

In Act II, we learn from Maureen that Leslie succumbed to his grief and excluded her, and we hear her side of the story -- feeling rejected by her family and friends because she married a Jew, she feels betrayed for not being asked to help when needed.

The two voices convey the need for families to communicate, and for love to transcend prejudice.
REVIEWS:

"A Different Way Home started life as a short radio play. It was subsequently televised by Granada Television in front of a small studio audience. Such was the reaction that it was then extended in to a double bill and premiered at the Oldham Repertory Theatre where it received best actor and best new play for the Manchester Evening News Theatre Awards. From this production it then enjoyed a highly successful national tour. I am proud to be associated with the development of this play, and to count Jimmie Chinn as a truly great writer and friend."

Premiere Production: The part of Leslie was first played on Radio 4 by Bernard Cribbins on the 13th July, 1988. Leslie was later performed by Roy Barraclough on Granada Television.