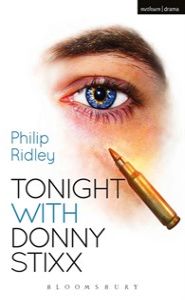 "It's at times like this I'm inspired by The Stupendous Santini. He toured the Mid-West during the 1930s, entertaining farmers affected by the Dust Bowl. No one would have remembered him were it not for the fact that during his most famous trick -- sword swallowing -- he accidentally punctured a lung and died on the spot. He became a legend."

Donny has committed an act that shocked everyone. Tabloids called him The Most Hated Boy Alive. But Donny doesn't want forgiveness. All Donny wants is... his own television show.

Written by internationally acclaimed writer Philip Ridley, Tonight with Donny Stixx is the companion piece to Ridley's 2013 Fringe First-winner Dark Vanilla Jungle, and received its premiere at the Soho Theatre, London, on 27th July, 2015, before premiering at at the Edinburgh Festival Fringe.
REVIEWS:

"We need writers such as Ridley to take us to these dark crevasses of experience... it all remains with you like a vivid hallucination."

"No one captures pain, violence and the misery of love gone wrong quite like Philip Ridley."

"Ridley, as ever a master of lyrical unpleasantness... lacerating excruciating theatre, which leaves the audience exhausted and speechless."