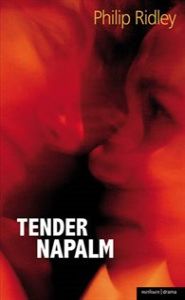 Tender Napalm is a high-impact, high-concept two-handed play which explores the landscape that is a relationship between a man and a woman. Explosive, poetic, brutal and ultimately redemptive, the play weaves a compelling theatrical tapestry to re-examine and re-define the language of love.

Philip Ridley's first new play since 2008 marks a change of direction for the acclaimed, ever-restless and maverick writer.

This volume also contains five poems from the performance sequence Lovesongs for Extinct Creatures: Your Love, Dark Sky Craving, The Silver Hat, I'm Waiting to be Killed, and The Seams, publishing for the first time extracts from Philip Ridley's cycle of love poetry.
REVIEWS:

"Fierce, transfixing and ultimately very moving... Mr. Ridley, who is also a filmmaker and children's book author, is high on my list of contemporary playwrights these days. He was always a writer of daring and satanic imagination, with a sui generis vocabulary to match... The exotic worlds he conjures feel deeply familiar, even to the point of banality, which is what makes them all the scarier and all the more revelatory."

"Philip Ridley's extraordinary play...brilliantly juxtaposes the banal and the fantastical, the delicate and the brutal, the euphoric and the agonised, as it maps out the voyage from first attraction to consuming devotion, by way of devastating tragedy... It is rich, slippery, grotesque and lovely, crammed with the writer's distinctive bruising lyricism and uncompromising immediacy... It is heady, heart-stopping stuff; wildly intoxicating."

"In the way it digs the loam of memory and explores how lovers create their own stories and mythologies, Ridley's play is completely and dizzyingly of itself. The writing seethes and burns... Seldom has sexual love been explored on stage with such ferocious honesty, brutality and melting tenderness."