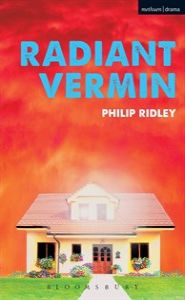 A wickedly comic satire about a young couple offered a way out of the housing crisis, and just how far they're prepared to go for it.

"I feel this... thing inside me. Just here. Next to my heart. It's small. The size of a sparrow. I don't know what it looks like. But I know it's got claws because it scratches. And I imagine it to be dark blue - mauve almost - like the veins on my mum's hands. I hear it talking. Its voice is high pitched and screeching. It's talking about all the things we've done."

Ollie and Jill want to tell you about their dream home. Some of the things they did to get it, you might find shocking. But they want you to know they did it all for their baby...
REVIEWS:

"Mr. Ridley... is high on my list of contemporary playwrights these days. He was always a writer of daring and satanic imagination, with a sui eneris vocabulary to match... But more recently he's been weaving theatrical fantasies that bear the relation to everyday reality that your dreams, and especially your nightmares... The exotic worlds he conjures feel deeply familiar, even to the point of banality, which is what make them all the scarier and all the more revelatory."

"Radiant Vermin is an allegorical satire about the housing crisis that unfolds like a modern day Grimm tale. ...It's a hysterically heavy-handed allegory for the ravages of gentrification... Radiant Vermin works, because it's dispatched with such flippant glee by the writer... Philip Ridley: sicko, firebrand, and all-round entertainer."

"A gift for savage prophecy is often unwelcome in society, and Ridley has it in abundance."

"Accessible and overtly political... Ridley pictures consumerism at its most insane and destructive. He's on stingingly funny form."