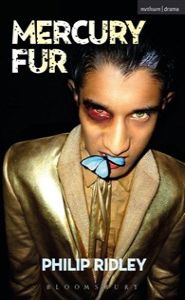 Challenging new play by the enfant terrible of dark, disturbing drama.
Eilliot is panicking. The party that he and his brother Darren have been planning has been brought forward -- to tonight.

In a lawless, ravaged city, where memories of the past have been brutally erased, the boys and their team survive by realising their clients' darkest fantasies. But just how far are they prepared to go in trading humanity for information? As the light fades and events spiral out of control it becomes clear than on the success of the evening hangs not just their security, but their existence.

The world is at its worst. Let the party begin.
Mercury Fur is a challenging new work containing some explicit scenes that may cause offence.
REVIEWS:

"Philip Ridley is a singular writer, a prolific polymath, probably a genius, and the creator of some of the most peculiar, grotesque and compelling British plays (and films) of the last several years."

Premiere Production: Published to tie-in with the play's premier at the the Drum Theatre, Plymouth and The Chocolate Factory, London in February 2005, produced by Paines Plough.