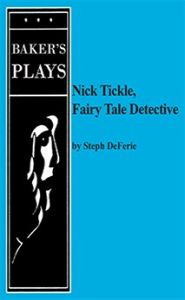 Granny can't tell her favourite fairy tales because someone really cruel and evil is stealing all the props!


Granny can't tell her favorite fairy tales because someone really cruel and evil is stealing all the props! Breadcrumbs, magic beans, a basket of goodies, a glass slipper -- all missing!

The future of fairy is at stake and it's up to the title character to set things right. With detective reasoning, his connections to the fairy tale underworld, plus some dumb luck, Nick Tickle sets out to locate the Mysterious Figure who's been pilfering all the props! He may require some help from the audience, (in some clever audience participation), but Nick Tickle is out to solve his toughest case ever!

There's plenty of audience participation and lots of laughs for junior detectives and their grown-ups. You and your students will have a lot of fun recreating the film noir genre on stage! Perfect for touring. From author of the popular Once Upon a Wolf.