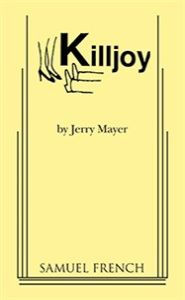 "Quite lighthearted with clever twists... Jerry Mayer has been having hit after hit, focusing on the humor and drama of marriage."


Here is an unpredictable, hilarious romantic comedy/thriller with witty dialogue and fascinating characters.

Carol is being driven crazy by her charming monster of an ex-husband, Victor, and his new wife, who employ every trick in the book to end Carol's thousand dollar a week alimony. Carol's quirky kids work at Victor's pasta restaurant chain, and Carol is sure Victor is bullying her son into an early grave. When Carol has a passionate affair with Victor's lawyer, they decide Victor has to die and the audience cheers its agreement.
REVIEWS:

"Quite lighthearted with clever twists... Jerry Mayer has been having hit after hit, focusing on the humor and drama of marriage."

"Killjoy slays with laughs in this tight tale of deception and torment."

"It's nearly impossible to dislike Killjoy... Mayer has so skillfully given equal weight to the comedy and plot twists that neither seems forced, heavy or contrived."

"Jerry Mayer has been quietly having hit after hit, focusing on the humor and drama of marriage."

"Jerry Mayer's comedies and their Santa Monica Playhouse stagings are marriages made in heaven... Irrepressibly witty. Mayer's dialogue is crisp, clever and crunchy... As a writer of great roles for loveable women, Mayer can't be beat."