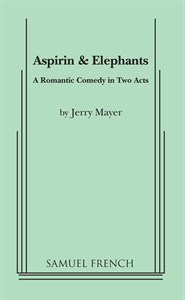 Witty and engaging. Delightful...The kind of comedy that leaves you smiling.


Aspirin & Elephants is a hilarious romantic comedy with six very strong roles bursting with the kind of witty dialogue actors love and audiences rave about.

This award-winning comedy deals with an upscale 60ish mother and father who take their two married daughters and sons-in-law on a North Sea cruise to celebrate their fortieth anniversary. The cruise was Mother's idea, who hopes to get her husband's spirits and also his libido raised after a recent heart attack. (His heart attack explains the title of the play. He jokes about his coronary, which felt like an elephant sitting on his chest. Now he has to take an aspirin every day.)

What Mom doesn't know is, her daughters are having their own share of big time problems with their husbands. Before the cruise is over, the courses of all three marriages change drastically and a father bonds forever with his ego challenged daughter.

"It's easy to see why this laugh-filled, emotionally moving comedy about marriage, family relationships and overcoming life's reverses has enjoyed record-breaking runs in theatre after theatre."
REVIEWS:

Aspirin & Elephants sails on a sea of comedy...Never less than entertaining.

A willing audience laughs and cries and roots for a happy ending.

Witty and engaging. Delightful...The kind of comedy that leaves you smiling.

Witty dialogue...You will leave feeling good and hopeful about the power of love

Mayer's laudably unchauvinistic contention is that men are the major problem in most marital conflicts. A sure-fire audience pleaser in the Neil Simon mode.