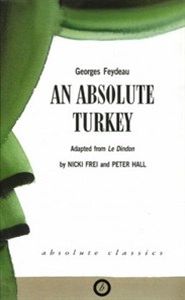 Georges Feydeau, master of farce, displays all his tricks of the trade in this witty, seamless and acutely funny translation.


Georges Feydeau's elegantly complex play is brought to life in this witty, seamless and acutely funny translation by Peter Hall and Nicki Frei. Feydeau, the supreme master of farce, displays all his dramatic tricks as his characters are pulled back and forth spinning dizzily in a surrealist climax of complications.
REVIEWS:

"This brilliantly paced bedroom farce is an absolute triumph from start to finish. The witty, highly risque translation sets the tone for an evening of frenzied Bacchanalian exuberance... [that is] enough to make you weep with laughter."

"Rises to an inspired climatic crescendo of pandemonium and panic... A night of true escapist pleasure."

"In all of drama there is no characters so busy and so petty, so frantic yet so absurd as the sex-obsessed men and women rattling round Feydeau's belle-epoque Paris... How artfully Feydeau raises our expectations and how splendidly he fulfills them."

This production of An Absolute Turkey (Georges Feydeau's Le Dindon) received its London premiere at the Globe Theatre in London, England, in December 1993.