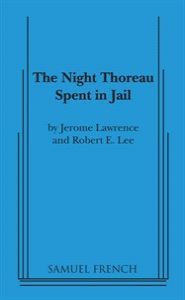 Night Thoreau Spent in Jail, The

Produced around the country under the American Playwrights Theatre program, this drama opens with Thoreau in jail for refusing to pay taxes to a government conducting a war of aggression in Mexico, at midpoint shows Emerson visiting him, and ends on the moving release.

Scenes portray his return from Harvard where he idolized Emerson, his attempt to establish a transcendentalist school, his career as a handyman and tutor in Emerson's household, his romance and his friendship with an illiterate cellmate.

The end is a grotesque dream in which the characters take up guises in a mortal assault on Mexico.
REVIEWS:

"Scene after scene moves you to laughter ot close to tears."