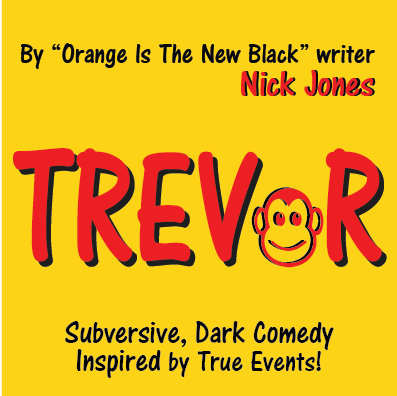 Inspired by true events, Trevor is a subversive comedy about fame, success, and the lies we tell ourselves in order to keep people from taking away an erratic, 200-pound chimpanzee.

Inspired by true events, Trevor is a subversive comedy about fame, success, and the lies we tell ourselves in order to keep people from taking away an erratic, 200-pound chimpanzee.

At the center of this hilarious and heart-wrenching play are two individuals fighting against a world unable to understand their love: Trevor, a chimpanzee who once performed in commercials with the likes of Morgan Fairchild, and his owner Sandra, who swears he would never hurt a fly...at least not on purpose.

A moving exploration of family, flawed communication, and humanity.
REVIEWS:

"Sweet, clever and weirdly touching... Trevor's absurdist mixture of showbiz satire and real-life poignancy is so continually delightful, in fact, that you may not notice, as it flows by, how resonant the story actually is."

"This is a comedy with a very, very long shadow... Or maybe it's the most enjoyable brooding drama ever written."

"Under its zany exterior...the play touches on serious topics: the trauma of has-been actors trying to get back into the game, and what happens when people anthropomorphize animals... All that plus a chimp playing a toy guitar, then fighting a human for the remote control? Few shows cover as many bases."

"Sly, witty... What makes this taut play...so impressive is not that it makes us understand and even like a dangerous ape, but that it does so while imagining him as an obnoxious jerk... Plays like Sylvia and Bengal Tiger at the Baghdad Zoo have found humor in animals speaking like humans. But in Trevor the laughs (and there are many) have an edge."