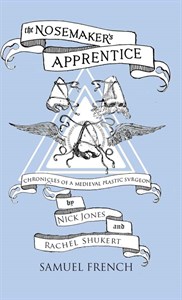 Boisterous intelligence that can't be contained....Infectious.


A father weaves a magic tale for his daughter to justify his unlicensed plastic surgery practice, tracing the origins of cosmetic surgery to craftsman in medieval Europe.
The hero of this tale is Gavin, a young orphan rescued from a dismal existence in the Ivanhoe Workhouse for Criminally Impoverished Boys when he is apprenticed with the local Nosemaker, and who eventually becomes one of the finest surgeons in Vienna, cradle of quack medicine. Using innovative skin grafting techniques and cutting edge alchemy, Gavin and his master seek only to do the Work of the Almighty by restoring small appendages lost to rat bites, dueling, and syphilis. But when they are unable to help a powerful and mutilated knight recently returned from the crusades, they find their feet over the fire...literally.
Hilarious, subversive, quasi-historical, and thoroughly debauched. . . a fated collaboration between two innovative (and troubling) writers.
REVIEWS:

Boisterous intelligence that can't be contained....Infectious.

The play itself has the feel of a big screen production; add in Jones and Shukert's gasping-for-air hilarious script...and you've got a much better alternative to both Brooks and the Python crew's watered down inspirations forever making the Broadway rounds.

Nick Jones and Rachel Shukert's The Nosemaker's Apprentice is that rare spoof that is not only a delicious satire...but also a comedy packed from tail to snout with guffaw-inducing one-liners.

Jones and Shukert are well on their way to becoming masters of the comedymaking profession.

Premiere Production: The Nosemaker's Apprentice: Chronicles of A Medieval Plastic Surgeon was first produced by The Brick Theater & Terrible Baby Theatre Co. at the Brick Theatre in Brooklyn, New York.