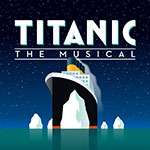 The musical play TITANIC examines the causes, the conditions and the characters involved in this ever-fascinating drama. This is the factual story of that ship—of her officers, crew and passengers, to be sure—but she will not, as has happened so many times before, serve as merely the background against which fictional, melodramatic narratives are recounted. The central character of our TITANIC is the TITANIC herself.

TITANIC begins (Prologue) as Thomas Andrews, the architect of the great ship, pores over the blueprints of his design (In Every Age). The curtain then rises to reveal the Ocean Dock in Southampton, England, where people are gathering to wonder at and to board the ship on sailing day: first a stoker (How Did They Build Titanic?), then additional crewmen (There She Is), officers and stevedores —Loading Inventory, the owner, the architect and the captain (The Largest Moving Object), the Third and Second Class passengers (I Must Get On That Ship), and finally the First Class passengers (The 1st Class Roster). Now fully boarded, the ship pulls out as the company sings a prayerful farewell (Godspeed Titanic).

One by one, the dreams and aspirations of key characters are presented: Barrett, the stoker who wanted to get away from the coal mines (Barrett’s Song); Murdoch, the ship’s officer contemplating the responsibility of command (To Be a Captain); Kate McGowan and the Third Class passengers who yearn for a better life in America (Lady’s Maid); Chief Steward Etches and the millionaires he serves who exult in the wonders of their world (What a Remarkable Age This Is!).

Barrett finds his way to the Telegraph Room where he dictates a proposal of marriage to his sweetheart back home (The Proposal) in a telegram transmitted by Harold Bride, a young telegraph operator smitten with the possibilities of the new radio technology (The Night Was Alive).

The next day, April 14, after Sunday morning church service, the First Class attends the shipboard band’s spirited out-of-doors dance-concert (Hymn/Doing the Latest Rag), an exclusive event crashed by Second Class passenger Alice Beane, a hardware store owner’s wife who wants more out of life (I Have Danced). That evening, as Fleet the lookout scans the horizon (No Moon) and bandsman Hartley regales the First Class Smoking Room with a new song (Autumn), the ship sails inexorably towards her collision, which ends Act One.

Act Two opens as the suddenly awakened First and Second Class passengers are assembled in the Grand Salon (Dressed In Your Pajamas In The Grand Salon) for life-belt instruction by Chief Steward Etches, before being sent up to the Boat Deck to board the lifeboats. In the Telegraph Room, Captain Smith, Mr. Andrews and Mr. Ismay, the owner, argue over who is responsible for the disaster (The Blame) while Mr. Bride tirelessly sends out the S.O.S. Up on the Boat Deck, the male passengers are separated from their families (To the Lifeboats), and all express hopes of being reunited (We’ll Meet Tomorrow) as the final boat is lowered. Isidor Straus (the owner of Macy’s) and his wife Ida remain behind together, as she refuses to leave his side after 40 years of marriage (Still) and Mr. Etches utters a prayer (To Be a Captain (reprise)). In the abandoned Smoking Room, Thomas Andrews desperately redesigns his ship to correct its fatal flaws until the futility of his actions leads him to predict, in horrifying detail, the end of TITANIC just as she begins her now-inevitable descent (Mr. Andrews’ Vision).

In an Epilogue, the survivors picked up by the CARPATHIA numbly retell what had once been Mr. Andrews’ dream (In Every Age (reprise)). The living are joined by their lost loved-ones in a tableau recapturing the optimistic spirit of the Ocean Dock on sailing day (Finale).


Premiere Production: TITANIC opened on Broadway, March 29, 1997 and played for 804 performances at the Lunt-Fontanne Theatre.