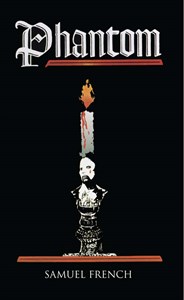 Everything is first rate.

Rhapsodic music that entrances, moves and haunts... A welcome link to musical theatre's golden past.

Has glory all its own.


This mesmerizing Phantom is traditional musical theatre in the finest sense. The Tony award winning authors of Nine have transformed Gaston Leroux' The Phantom of the Opera into a sensation that enraptures audiences and critics with beautiful songs and an expertly crafted book. It is constructed around characters more richly developed than in any other version, including the original novel.
REVIEWS:

Music that can break your heart... This is a score in the grand manner.' - Gannett Newspapers'One of the most appealing America musicals of recent years.

One of those musicals you thought they just didn't write anymore.

Has glory all its own.

Rhapsodic music that entrances, moves and haunts... A welcome link to musical theatre's golden past.

Everything is first rate.