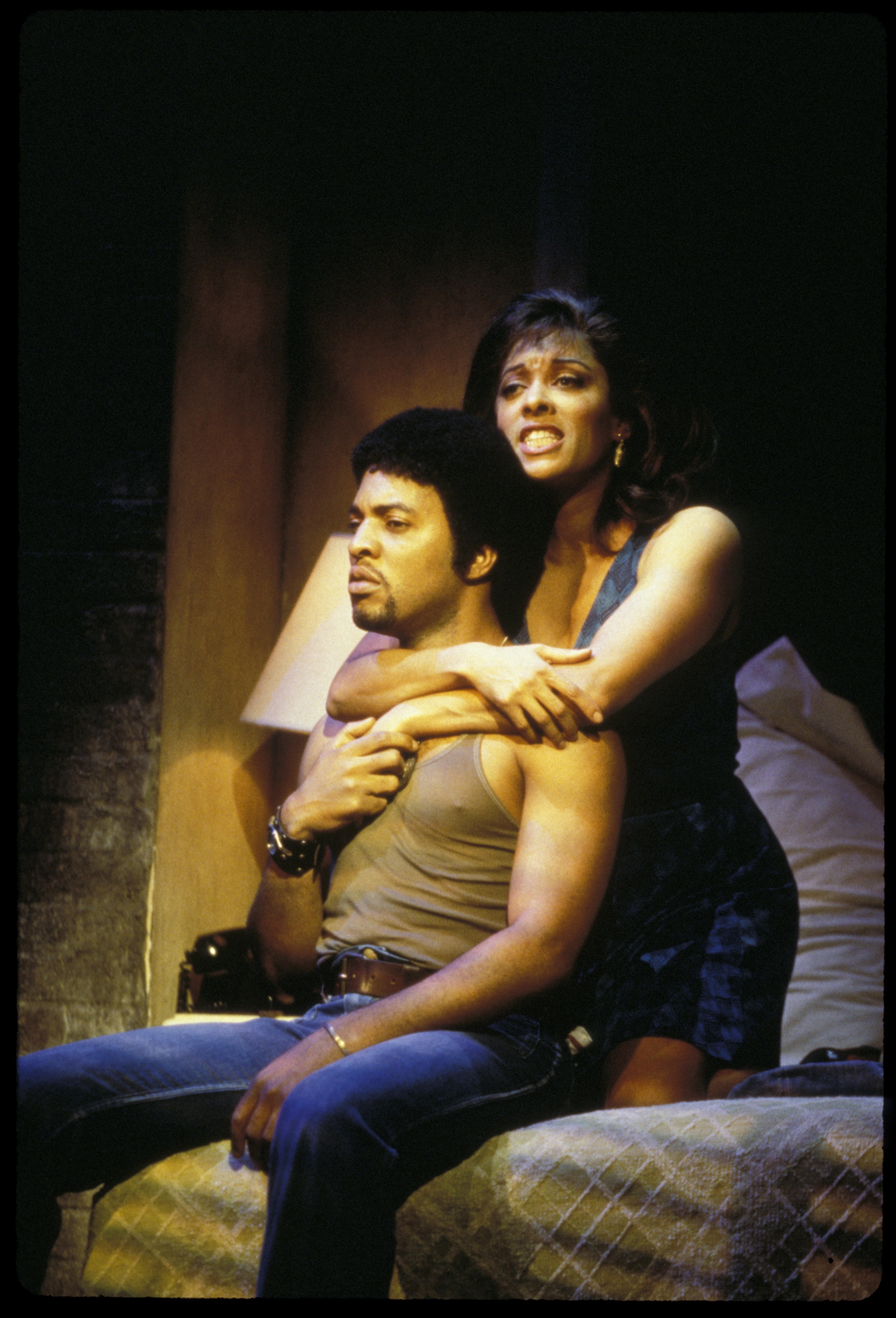 Cy Coleman's score for THE LIFE is charged with emotionally revealing songs; the music is the pulse of life itself, as experienced by the show's characters.
Trapped in a location and situations most of us would avoid at all costs, the personal stories and dreams of Fleetwood, Memphis, Jojo, Sonja, Queen, Mary and Lou are realistic and gripping.
Musical numbers include Use What You Got, A Lovely Day to Be Outta Jail, The Oldest Profession, Easy Money, Greed, My Friend and My Way or the Highway.


THE LIFE depicts the pulsating life on the Times Square streets in the 1980's-where everything had a price, especially sex -- the garish topless bars, the transvestite joints, the hookers who worked the sidewalks at the bidding of their pimps.
Jojo, an opportunistic, conniving white hustler in the thick of the action, has a bare-knuckled plan for feeding his ambition. But among these unsavory characters there are appealing people who have been caught in the web of these sordid surroundings. Sonja, a veteran hooker who has seen better days, befriends Queen who is on the street because her man, Fleetwood, a displaced Vietnam veteran, needs her support. She has saved her money and on this day plans to get away with Fleetwood and leave the life for good, enjoying, with Sonja, A Lovely Day to Get Out of Jail.
Returning to her hotel room, Queen discovers that Fleetwood has spent half of her savings to pay off his drug debts and feed his habit.
Fleetwood has an unrealistic dream of attaining power, money and A Piece of the Action. Jojo tells him he’ll never amount to anything as a pimp as long as he’s romantically involved with the woman he’s selling. Jojo takes him to the Port Authority where they find Mary, just off the bus from Minnesota, a girl with the mien of an angel but, as we eventually find out, she’s no angel. Jojo grabs at her suitcase so that Fleetwood can rescue it and become her hero.
The demi-monde hangs out at a bar owned by Lacy, who has seen it all but has certain affection for his clientele. In the company of her sister whores, Sonja bemoans the wear and tear of her life. When Fleetwood and Mary arrive, Memphis, the “biggest businessman on the block” comments on the professionalism of his trade and soon zeroes in on the newcomer.
Reluctantly, Queen takes Mary to the room she shares with Fleetwood and tries to persuade her to Go Home. Later, as prostitutes eye potential customers, a gospel group parades by. The girls defiantly stand up for themselves, while the pimps complain about the harassment of the cops.
Jojo cajoles Mary into taking a turn as a go-go dancer. A smashing success, she celebrates her good fortune in Easy Money with Fleetwood and Jojo, who has her in mind for his “mentor” Lou, a gaudy Los Angeles producer of “motion pictures” of the triple X genre, who’s looking for fresh corn-fed talent.
Once again in jail, Queen reflects on her attachment to Fleetwood; while, enticed by Mary, Jojo and Fleetwood spend the night with her in a threesome. As Fleetwood turns his attentions toward Mary, Memphis makes his move to put “Queen in his deck.” Queen discovers what’s been going on between Fleetwood and Mary, and decides she’s finally had enough. As everyone parties at The Hookers’ Ball, Lou makes off with Mary, while Queen, shunning Fleetwood, attaches herself to Memphis.
Over a game of Three-Card Monte, Jojo and the pimps discuss their “silent partner,” Mr. Greed. In Memphis’ spacious apartment, Queen thanks him for getting her out of jail and for the beautiful dress he gave her to wear to the Hookers’ Ball; but Memphis makes it very clear that the dress was a $6,000 loan that she must repay with her earnings. He warns Queen that she better not leave town “cause you’ll be coming back real soon for a funeral – Fleetwood’s; followed shortly by your own.”
Queen tells Sonja that she must find Fleetwood and warn him about Memphis’ threat. She asks Jojo to tell Fleetwood to meet her the next morning at Lacy’s. Meanwhile Mary, with Lou, toasts her acceptance of his offer of a movie career.
The next morning Jojo double crosses Queen and comes to Lacy’s with Memphis, who brutally flogs the terrified woman. When Fleetwood arrives, Queen reminds him of what they once had together. When Fleetwood returns to his hotel, he finds Mary leaving for Los Angeles.
Near the Lincoln Tunnel, Memphis’ henchman, Snickers, pushes Queen to get “plenty of action tonight. Memphis is dependin’ on it.” She, Sonja and other girls share their hopes for the future.
Later, near the Hudson River in a spot once special to Queen and Fleetwood, Sonja hands Queen a bus ticket and a suitcase in a desperate attempt to get her away from Memphis. Fleetwood unexpectedly appears and tries to talk Queen into making a new start, but Queen bitterly rejects him. Jojo guides Memphis onto the scene. Fleetwood pulls a gun on Memphis, but Jojo knocks the gun loose as Memphis mortally stabs Fleetwood; Queen seizes the fallen gun and shoots Memphis. Sonja decides to take the rap for killing Memphis, claiming self defense; she and Queen say good-bye My Friend, then Queen departs for the bus, which will carry her to freedom, as Sonja surrenders to the police.