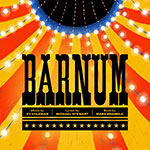 See why “The Greatest Show On Earth” is welcomed with open arms all over the world. With songs like There’s a Sucker Born Every Minute, The Colors of My Life, I Like Your Style and Love Makes Such Fools of Us All. BARNUM is certain to be a huge success with your group, too. There will only be one P.T. Barnum, but his enthusiasm and spirit live forever in this show.


“Barnum’s the name. P.T. Barnum. And I want to tell you that tonight you are going to see-bar none-every sight, wonder and miracle that name stands for!”
Here is the show that traces the career of America’s greatest showman from 1835 to the year he joined James A. Bailey to form The Greatest Show On Earth. Let us begin, as BARNUM does…
OUTSIDE THE TENT where Barnum tells us he’s here to defend the ‘noble art of humbug’ which he defines as the puffing up he gives the truth; the coat of varnish he puts on the hard facts of life. Whether we agree with him or not, Barnum’s sure he’ll be able to sell us his bill of goods. Why? There Is a Sucker Born Ev’ry Minute.
HUMBLE BEGINNINGS as Barnum signs up his first attraction, Joice Heth, the oldest woman in the world. Joice turns out to be less of a draw than he’d hoped until he tries a bit of humbug and pitches her as George Washington’s nurse. Joice is a big success and sings the virtues of living to be 160 in Thank God I’m Old.
P.T. BARNUM VS. THE FEMALE OF THE SPECIES, an age-old contest that pits Barnum against his good wife, Chairy. She wants him to settle down, run a respectable business -a clock factory for instance-and Barnum explains that clock-making is just not the right color for him. He tells us what he means in The Colors of My Life, then rushes off to close a deal to build a museum at the corner of Ann Street and Broadway to house his growing collection of attractions. Chairy, alone, tells us about the colors of her life.
CLOWNS! A cornucopia of them, tumbling into the main ring as-with Chairy to guide them-they build Barnum’s American Museum -One Brick at a Time.
STEP RIGHT UP LADIES AND GENTLEMEN, says Barnum, and let me tell you about all the wonders you’re going to see inside my museum! -Museum Song.
BARNUM VS. THE FEMALE OF THE SPECIES, PART II. The years have gone by, the Barnums are a bit older and a bit more successful, but their conflict is the same. And so is their affection for each other in I Like Your Style.
25 INCHES FROM TOE TO CROWN! None other than Barnum’s latest and most sensational attraction, General Tom Thumb, who tells us that Bigger Isn’t Better.
A RESPECTABLE ATTRACTION AT LAST-one that brings great rewards and poses great problems; Jenny Lind, the Swedish Nightingale, whom Barnum presents in her first American concert at Castle Garden. Jenny sings first in Swedish, then in English, and wins the hearts of all who hear her-Barnum included-Love Makes Such Fools of Us All.
THE HUMBUGGER HUMBUGGED! Barnum buys his own bill of goods-well, who could resist a Swedish Nightingale-and leaves Chairy to tour with Jenny and put a bit of color in his own life-Out There.
OUT ON THE MIDWAY for a Grand Patriotic Parade, when the citizens of Washington salute Jenny Lind as she makes her first appearance in the nations’ capital-Come Follow the Band.
A SECOND MUSICAL DIVERSION: PAYING THE PIPER, as Barnum realizes that Jenny Lind is not for him, that he only loves his wife. He returns to Chairy on her terms as he promises to banish color from his life and live it in Black and White.
BARNUM VS. THE FEMALE OF THE SPECIES, PART III. Many years later, Barnum is out of the ‘humbug’ business, and Chairy is ailing. Both of them realize how seriously ill she is, and before she leaves him forever, they declare their love for each other by affectionately restating their age-old quarrel-The Colors of My Life.
BEHIND THE SCENES, BENEATH THE MAKE-UP, as Barnum realizes that being a respectable businessman is not for him, and even his beloved Chairy would have agreed that what he is-and will always be-is The Prince of Humbug. THE MAIN EVENT: THE GREATEST SHOW ON EARTH! James A. Bailey arrives on the scene, and after a selling job that even Barnum would be proud of, convinces Barnum at last to Join the Circus.
A PRINCELY FINAL ATTRACTION. The tent pole comes down, the canvas is folded, the show is loaded and ready to roll, as we hear from Mr. Phineas Taylor Barnum-himself-Final Chase and There Is a Sucker Born Ev’ry Minute (Reprise).