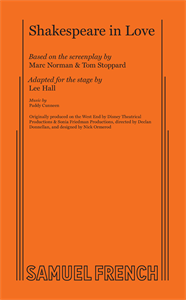 FIVE STARS! "Funny, often genuinely moving, and generates a glow you could warms your hands by... The best British comedy since One Man, Two Guvnors and deserves equal success."


Young Will Shakespeare has writer's block... the deadline for his new play is fast approaching but he's in desperate need of inspiration. That is, until he finds his muse -- Viola. This beautiful young woman is Will's greatest admirer and will stop at nothing (including breaking the law) to appear in his next play.

Against a bustling background of mistaken identity, ruthless scheming and backstage theatrics, Will's love for Viola quickly blossoms and inspires him to write his greatest masterpiece.
REVIEWS:

FIVE STARS! "Funny, often genuinely moving, and generates a glow you could warm your hands by... The best British comedy since One Man, Two Guvnors and deserves equal success."

FIVE STARS! "An absolute joy from beginning to end!"

"There's the elating sense that the material -- with its rivalry between the public playhouse echoing between the Montagues and the Capulets -- is revealing in it's natural elements in the theatre... It makes you feel grateful to be alive."

"Marvelously fluid, riotously funny, and often intensely, even startlingly poignant... This may be, in part at least, a comedy about Shakespeare falling in love; but joking aside, it could just make you fall, all over again, in loe with Shakespeare."

Premiere Production: Shakespeare in Love premiered on the West End at the Noel Coward Theatre in London in July 2014 under the direction of Declan Donnellan.