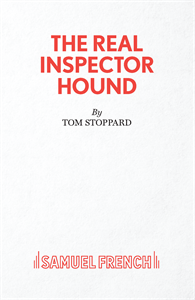 Feuding theatre critics Moon and Birdboot are swept into the whodunit they are viewing.


Rave reviews greeted this long one act masterpiece of farce when it was recently revived in London with Peter Shaffer's Black Comedy.

Feuding theatre critics Moon and Birdboot, the first a fusty philanderer and the second a pompous and vindictive second stringer, are swept into the whodunit they are viewing. In the hilarious spoof of Agatha Christie-like melodramas that follows, the body under the sofa proves to be the missing first string critic. As mists rise about isolated Muldoon Manor, Moon and Birdboot become dangerously implicated in the lethal activities of an escaped madman.
REVIEWS:

"The Real Inspector Hound is an exceedingly clever lampoon, sharply in focus..."

"What absurd fun Tom Stoppard created when he let his fantasies run wild."

"Witty and delicious parody of the fog bound whodunit."

Premiere Production: The Real Inspector Hound premiered at the Criterion Theatre in London in June 1968 under the direction of Robert Chetwyn.