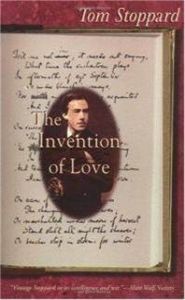 Invention of Love, The

It is 1936 and A. E. Housman is being ferried across the Styx, glad to be dead at last.

It is 1936 and A. E. Housman is being ferried across the Styx, glad to be dead at last. His memories, however, are dramatically alive. The river flowing through this play connects Hades with the Oxford of Housman's early manhood, where high Victorianism in art, literature and morality is being challenged by the aesthetic movement and an Irish student called Wilde is about to burst onto the scene.

By century's end, the poet and scholar Housman, the greatest, most caustic and wittiest classicist of his time, has secured his reputation in the sixty three poems collected in A Shropshire Lad.

The Invention of Love uses the free form of memory to give a sympatric account of Housman in the age of Oscar Wilde, and it asks whose passion was really the fatal one?
REVIEWS:

"Dazzling... A magnificently funny play, but as fleshily layered as an onion, ideas wrapping around ideas, thoughts jostling at thoughts, all jigging into place like a crazy quilt collage... in which Stoppard brilliantly places Houseman and Wilde...in the English cultural landscape of the time."

"Stirring theatre... This time travelling fantasia... has a fluid, glistening quality that will carry you along... There is not one word or image that doesn't help to complete the puzzle."

"Dazzling... The calisthenics Stoppard provides for the cerebrum leave you giddy and exhilarated."