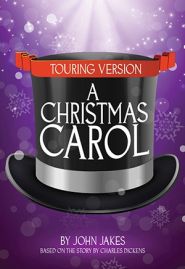 
This version of John Jakes' nationally successful stage adaptation (also available) specifically tailors the Charles Dickens' holiday classic to the needs of a group touring the show to school cafeterias, gymnasiums, auditoriums and other venues not equipped for conventional theater.

The script not only tells the Dickens' story faithfully but also allows young audiences to enjoy the real magic of theater -- watching the actors create the scene and costume changes as the show moves along. No lighting or sound equipment is required for the production. Music is provided by the cast a cappella.

As in the full-length adaptation, Charles Dickens is introduced at the beginning, starts to tell the story of Scrooge's redemption, then brings it alive with the help of the others in the cast. All in all, this is A Christmas Carol low in production expense but high in imaginative uses of the theater.