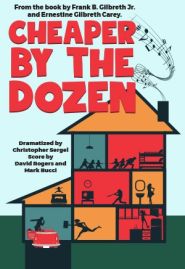 Cheaper by the Dozen (musical)

An exuberant score brings a special enchantment to this outstanding musical comedy.


An exuberant score brings a special enchantment to this outstanding musical comedy.

Dad was (in fact) one of the great pioneers in industrial efficiency and he sings to his large family, "What works in the factory works in the home." His older daughters, however, rebel against their father. Anne, the oldest, sings of her coming independence "On My Own," unaware that her father has a heart condition and is driving them toward superefficiency so the family will be able to survive better when he's gone. What Dad doesn't realize is that Anne has grown up.

The breaking apart of Anne and her father and then their coming to a special maturity and mutual respect give meaning and emotion to what is otherwise a delightful and original comedy romp! This musical will excite your cast and your audience.