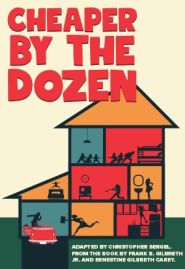 Cheaper by the Dozen

"Being allowed the privilege to direct Cheaper by the Dozen has been one of my most rewarding theatrical experiences..."


Suppose you're an attractive high school girl and you're not only a member of a large and unique family but your father is, in fact, one of the great pioneers of industrial efficiency. Then suppose he decides, for no apparent reason, to apply his unorthodox methods to you and to the rest of your big family.
The results are terribly embarrassing, funny and --it must be admitted-- extremely effective! To Anne, however, the chief effect seems to be that of making them seem ridiculous to everyone else at school --especially to the boys!
Dad pushes ahead with better organization for his large and delightful family. He puts up a chart for the young people to initial after completing each household task, uses a rung as an imaginary bathtub to demonstrate how to take a really efficient bath and appoints a utilities officer to levy fines on wasters of electricity. While the situations are often uproarious, there's a serious reason. Dad has a heart condition which he's keeping secret. The children don't understand them. Anne, the oldest, rebels. Both Dad and she are miserable at the lack of understanding between them. Then in a deft and moving scene, Dad becomes aware of how much Anne has grown up.
If we had to choose from among all our publications the one show most likely to delight an audience, this play would be our choice.
REVIEWS:

"Being allowed the privilege to direct Cheaper by the Dozen has been one of my most rewarding theatrical experiences. Blending the experience and age levels of the actors and actresses into an ensemble performance has truly been exciting to witness. Actresses and actors of all ages working together and learning from each other is such an important aspect of a successful experience of quality theatre."