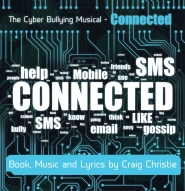 CONNECTED explores the dangers and consequences of the interface between life and the online world in a story that resonates throughout schools and households everywhere.

Emma arrives at a new school and runs the gauntlet of finding out about friendship groups and how the game is played in this new setting. Meanwhile Dylan’s social awkwardness means he is spending more and more time on his computer locked away in his room. When Emma finds herself the object of unwanted attention of the school jock Michael, his ex girlfriend Kate uses any means available to put the new girl in her place. The entire situation takes a turn towards the sinister as their online worlds collides with their lives in a way over which they ultimately have no control and which threatens to have the most disastrous consequences.

CONNECTED explores the dangers and consequences of the interface between life and the online world in a story that resonates throughout schools and households everywhere. An exciting and engaging production that uses an energetic, fast paced narrative and an edgy original contemporary musical soundtrack, CONNECTED brings into focus the vital issue of the dangers and consequences of not managing online relationships responsibly.

* * Connected was written specifically for high school students as means of highlighting the issues and effects surrounding cyber bullying.  It is intended to stimulate discussion and highlight the sometimes unintended consequences of cyber activities be it via the mobile phone, texting, Facebook, Twitter, email or elsewhere.

(This show is also available in a large-cast version)