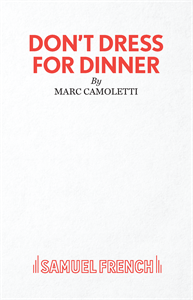 Hurtling along at the speed of light, [this] breathtaking farce is a near faultless piece of theatrical invention.


This boulevard comedy was a smash hit in Paris, where it played for over two years, and in London, where it ran for six years at the Apollo and Duchess Theatres. It has since played in theatres all over the USA and the English speaking world and is due for revival in London in 2013.
Bernard is planning a romantic weekend with his chic Parisian mistress in his charming converted French farmhouse, whilst his wife, Jacqueline, is away. He has arranged for a cordon bleu cook to prepare gourmet delights, and has invited his best friend, Robert, along too to provide the alibi. It's foolproof; what could possibly go wrong? Well.... suppose Robert turns up not realizing quite why he has been invited. Suppose Robert and Jacqueline are secret lovers, and consequently determined that Jacqueline will NOT leave for the weekend. Suppose the cook has to pretend to be the mistress and the mistress is unable to cook. Suppose everyone's alibi gets confused with everyone else's. An evening of hilarious confusion ensues as Bernard and Robert improvise at breakneck speed.
REVIEWS:

The good times are back at the Royal George Theatre....A series of rib-rousing strokes. All night long. Better yet, you don’t have to suspend your intelligence...In a comedy of confusion that almost collapses under the weight of duplicity, mistaken identity, and extramarital affairs, but somehow stays in the air like a precarious but well-built souffle.

I feared it would be boring-boring, but it isn't-isn't. It's a nifty comedy farce about double adultery and gourmet cooking...I can't think of a better way of forgetting the recession.

I found myself having two of the most rib-tickling hilarious hours I have spent in the theatre in some time. It’s amazing what the right combination of smart writing, polished acting and slick direction can do to energize a tired genre...A text book example of how to create the perfect farce.

The labyrinthine twists and turns are liberally sprinkled with jokes, amiably roared to keep everyone giggling...It gives the whole cast the chance to enjoy themselves going over the top....The performance is a delight.

Hurtling along at the speed of light, this breathtaking farce is a near faultless piece of theatrical invention. Within seconds we are drawn into a delicious web of marital treachery which accelerates with classic symmetry to an all-star denouement.

Premiere Production: Don't Dress for Dinner was first presented n the West End by Mark Furness Ltd at the Apollo Theatre in London, England, in 1991. It was directed by Peter Farago.