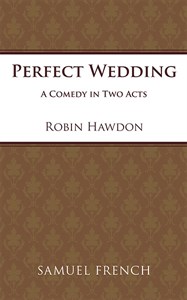 
An appalling situation. A bridegroom wakes on his wedding morning in his own bridal suite, with his bride-to-be about to arrive any moment, and finds a strange girl in bed beside him.

What's more an extremely attractive girl whom, in the depths of his post stag-night hangover, he can't remotely remember even having been introduced to. Worse - during the ensuing panic to get the stranger dressed and out of the way, the bride arrives and the girl is trapped in the bathroom. The only way out of the dilemma is to persuade the best man to pretend that the hidden girl is his girl friend. Then the problem is that the best man’s real girl friend has to be kept ignorant of the fact. By the time the bride's parents and half the hotel staff get in on the act, the chaos reaches nuclear proportions!

The play has provoked waves of laughter in literally hundreds of productions around Europe and across America, and is due to be made into a Hollywood film. It is that rare combination - a riotous comedy and a touching love story at the same time.
REVIEWS:

Laughs abound in the American premiere...It all works out in the end, but not before playgoers have aching sides.

Funny without being deep, titillating without being dirty....warp-speed back-and-forth dialogue as characters skitter and scamper through this maze of a sit-com...The full-house audience roared with delight.

The audience is left aching with laughter...It makes for a crazy, wonderful evening.

A splendid evening in the theatre...met with lengthy applause and shouts of approval.

The play moves at the speed of light, with a riot a minute that leaves the audience crying with laughter...The perfect medicine for all those thinking about getting married.

The whole show reminded me of a cross between Fawlty Towers and a Whitehall Farce...Forget the wedding album, this is one scrapbook you'll never tire of looking at.

Premiere Production: Perfect Wedding received its US premiere with the Peninsula Players, under executive director James B. McKenzie, on August 19, 1997.