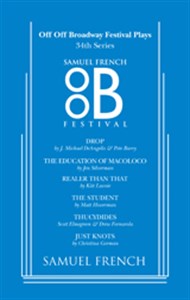 
One of Manhattan's most established play festivals, the Samuel French Off Off Broadway Short Play Festival fosters the work of emerging writers, giving them the exposure of publication and representation.

The festival resulting in this collection was held July 14th-19th, 2009 at The Main Stage Theatre on 42nd Street in New York City.

From the initial pool of over 715 submissions, the Final Forty plays were chosen to be performed over a period of one week. A panel of judges comprised of celebrity playwrights, theatrical agents and artistic directors nominated one or more of each evening's plays as finalists. The final round was then held on the last day of the festival. Out of these plays, six winners listed below were chosen by Samuel French, Inc. to receive publication and licensing contracts:

The collection includes:
Drop by J. Michael DeAngelis and Pete Barry
The Education Of Macoloco by Jen Silverman
realer than that by Kitt Lavoie
The Student by Matt Hoverman
Thucydides by Scott Elmegreen and Drew Fornarola
Just Knots by Christina Gorman