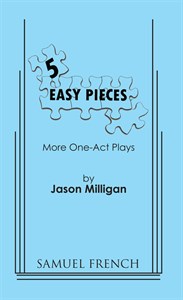 
Originally staged at the Egyptian Arena Theater in Hollywood, this darkly comic piece (reminiscent of the style of David Mamet) takes place in the back room of a Long Island coffee shop as three cops covertly cook up the "perfect crime." Their scheming is at turns edgy, pointed and hilarious. But can they trust each other? -- that's the question. What begins as a simple burglary plot escalates into a cat-and-mouse game -- and finally into a dramatic confrontation, forcing each of the men to come to grips with the fact that trust is a two-way street. And, once it's broken, there's no turning back.


Premiere Production: One Way Street was originally presented by The Grace Players at the Egyptian Arena Theatre in Hollywood as part of their "Acts of Grace" one-act play festival. The play was directed by Natalija Nogulich.