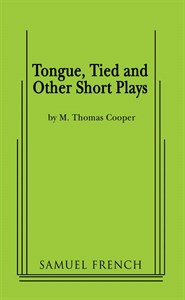 Published in the collection Tongue, Tied and Other Short Plays.


A man and a woman fall in love through their hand puppets.
Published in Tongue, Tied and Other Short Plays.

My favorite was M. Thomas Cooper’s Tongue, Tied. I even like the comma in the title. He & She have Problems in Relating. These are compounded by the Sock-Puppets on their hands. Beings who have Lives of Their Own!” - Glenn Loney’s Show Notes“…the mesmerizing, very funny “Tongue, Tied”…

This one’s definitely a comedy, and a bit raucous too.

Premiere Production: Tongue Tied was first produced by Artworks Enterprises at the 2006 Ashland 10-Minute Play Festival. It was directed by Amanda Long. It was subsequently produced at the 2008 Humana Festival at Actors theatre of Louisville, directed by Marc Masterson, and City Theatre of Miami's 2008 Summer Shorts Festival, directed by Stuart Meltzer.