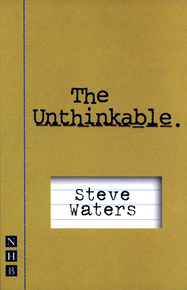 A hard-hitting play about the collapse of idealism in contemporary politics.


A hard-hitting play about the collapse of idealism in contemporary politics.

The founder members of a radical think-tank meet to toast their success – fifteen years of second-guessing the next big idea; fifteen years of shaping politics on the left; fifteen years of thinking the unthinkable. But there's a spectre at the feast, and a scandal is about to break that will ruin more than just the party.

Steve Waters' play The Unthinkable was first staged at the Crucible Studio, Sheffield, in 2004.
REVIEWS:

"Steve Waters has a refreshing willingness to embrace contemporary life... The Unthinkable embraces many big ideas, global and local, philosophical and political, as well as personal."

"Steve Waters' excellent new play is about the death of idealism, the killing of a political dream. It's a fascinating study of the way the Left has been increasingly influenced by the Right without anybody really appreciating what has happened. The story is told in broad strokes, often funny and always hugely theatrical."