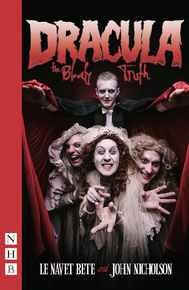 "Tonight I need you to understand the difference between fiction and the truth. Tonight you will discover that Bram Stoker’s Dracula, is in fact… fact."


Travelling across Europe, from the dark and sinister Transylvanian mountains to the charming seaside town of Whitby, Professor Van Helsing and his three amateur actors stage a life-changing, theatrical production of Dracula – hoping to establish, once and for all, the bloody truth.
The result is a delightfully silly, fast-paced and faithful (-ish) adaptation by John Nicholson (Hound of the Baskervilles, Peepolykus) of Bram Stoker’s novel, originally performed by physical-comedy theatre company Le Navet Bete on a UK tour in 2017.

Performed by four actors playing forty characters, Dracula: The Bloody Truth is a full-blooded adaptation offering abundant opportunities for any theatre company or drama group to sink their teeth into.
REVIEWS:

"Dracula: The Bloody Truth is side-splittingly funny and is, by far, the best new comedy I’ve seen this year."