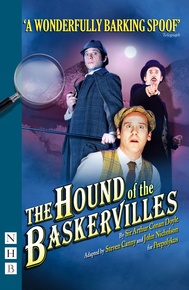 Hound of the Baskervilles, The (stage version)

When Sir Charles Baskerville is found dead on his estate, with a look of terror still etched on his face, and the paw prints of a gigantic hound beside his body, the great detective Sherlock Holmes is summoned from Baker Street, with Dr Watson in tow, to unravel the mysteries surrounding his death, and investigate the ancient curse of the Hound of the Baskervilles...

Packed full of the verbal and visual ingenuity that hit comedy team Peepolykus is known for, and offering abundant opportunities for silly comedy and slapstick, this version will suit any theatre company or drama group looking for a sublimely funny adaptation of a classic tale.

This stage version of The Hound of the Baskervilles, adapted by Steven Canny and John Nicholson, was first performed by Peepolykus at the West Yorkshire Playhouse, Leeds, in 2007.
REVIEWS:

"A delightful take on the classic Sherlock Holmes story."

"A happy blend of madcap humour and surreal comedy with at least one laugh per minute… a superb, extremely amusing, feel-good evening’s entertainment."

"A masterclass in madcap energy… a fun and fresh Sherlock Holmes romp."

"Only the most pure of purists could fail to be entertained by this very funny and inventive take on one of the great archetypes of English literature."